Menu
Log in
Register
Install the app
You are using an out of date browser. It may not display this or other websites correctly.
You should upgrade or use an alternative browser.

I just finished resizing all the individual parts and moving them to the grid so now I'm ready to do the 1x1 mapping. Here's a picture of the map. 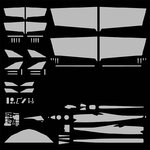 Maybe I'm being dense. Shouldn't the movable control surfaces be separate pieces in the map? Or are they just painted on? I've never messed with CS's.

Bill Stuntz said:
Maybe I'm being dense. Shouldn't the movable control surfaces be separate pieces in the map? Or are they just painted on? I've never messed with CS's.
Click to expand...

Bill, the cool thing about UV mapping is: it's as if the 2D image is cut into pieces that are glued permanently onto their corresponding 3D polygons, even if those polygons move around.
Last edited: Jun 30, 2022

My denseness again: I'm assuming that's basically the template for a CS. Yes? If I'm right, how would I make the wing blue and the aileron white and hit it exactly? I don't see an obvious way to precisely identify "this is where the wing stops and the aileron starts" in the .jpg above. Do I just guess, apply it, & re-do it if I miss? And what about the hinge line? The vertical TE of the wing is blue, and the curved LE that allows the aileron to move without binding is white. Don't those need to be paintable as separate surfaces? I assume the thin lines below the wings & stab are the visible TE of the ailerons & elevators. Don't there need to be corresponding (wider) parts for the wing/stab TE & the aileron/elevator LE based on the thickness of those parts? Those areas are visible when the surfaces are deflected but partly concealed at neutral. Or does the color just wrap around the edges automatically?

Or am I just being stupid and not seeing what they're really for? As I said, I've never messed with CS's so my assumptions could be completely wrong. It just feels like there are a few things missing.

In other illustrations I've seen here, the parts aren't laid out so neatly & obviously. I can't point at any examples, but some of them have seemed to be more-or-less randomly laid out with parts placed wherever they fill an empty spot on the page, and several parallel nearly identical narrow stripes in one corner. Which narrow stripe is the edge of which part? So I pretty much skimmed those diagrams without really trying to figure them out. But I'm invested in this project & I REALLY want to understand.

oooooh! Very well-explained, Bill. I've only ever modified existing CSs, so now you've got me wondering the exact same things.

Then I guess I'm doing my job correctly. I try to show others how to think & analyze rather than simply accept stuff like "That's the way it's always been done." I think I've said it before, but I can't remember stuff by memorizing minutiae. I gotta know WHY so the details will almost fall out into my hands. I learn new stuff every day here, and on a couple other message boards where I hang out. I think of myself as a jack-of-all-trades and master of some.

I forgot to mention that in those other maps I've seen, I noticed that the stabs/elevators & fins/rudders were shown as separate parts - which is what prompted me to think there might be parts missing. And I've seen several comments in other threads that it's very hard to get CS's to look right, especially where parts meet, or on curved surfaces. Technoid even mentioned that in an earlier post in this thread.

You and I are no doubt eager for technoid's (or any anybody's) response.

If he's smart, he's still in bed. I was just tossing & turning, so I got up & sat down at my computer.

@Bill Stuntz Well mapping is sort of an art and can be done many ways, but this is how I do mine. When I first started I mapped the control surfaces like you mentioned, as a separate part away from the main part (wing, stab). But that caused problems when you create a color scheme that has curved stripes going from the wing to the aileron so you have to fiddle with them to get them to align properly. But when the aileron and wing are mapped together you just paint them on and it's done. Of course, like you said, trying to paint the wing and aileron two different colors is tricky. But there's another template I use to do that which I don't normally upload a picture of on the forum, it's called the "visible lines", and here's a picture of it. Using it you can "zoom in close" in your paint program and find exactly where the lines are for the parts. Sometimes there is a "tiny" bit of bleed from one part to the next but nothing you can see without "zooming" in real close in the editor. Of course when you don't have the "visible lines" template you do have to fiddle a lot to find the exact edges. But I'll be happy to upload the "visible edges" template for anyone that wants it. Interestingly I had complaints when I first started and mapped the control surfaces as separate parts. 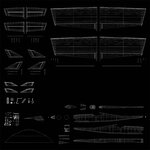 Thanks. It certainly is an art, like everything you do. And with the way you lay everything out in sections, it's pretty obvious what everything is.

But what about the ones I've seen that have the parts sorta randomly scattered around, with a stack of edges somewhere. How do they keep track of which edge belongs with what part? Is there some other map that identifies that the third edge down in the stack is the left aileron's TE or something? Or this little circle is the spinner bolt & that one is the tailwheel axle cap? How do you account for the sorta hidden surfaces like the hinge lines? Or even worse, something like flaps that are hinged on the bottom edge and close completely flush because they only deflect in one direction? If the flaps are down, the edges are visible, but they're completely hidden when they're up.

Such good questions, Bill. I also wonder, until the first color scheme is created, how can we tell which small pieces belong to which small parts? For example, in the lower left quadrant of technoid's mapping, there are a lot of small pieces. What are those parts on the actual airplane? Some of them are obvious, like the tail wheel and the muffler, but not all of them are.

Often when you look at professional mapped planes the color map in the CS TGA file is really weird looking. And like what space boy mentioned, you can't really tell what the parts are until you start comparing what the colors of the parts are to the plane, and then sometimes it's still really hard. SO.. it's not always that easy to make a color scheme. But I map stuff really simply so it's pretty easy to see what's what. Some of the small parts on the bottom left of my CS TGA file is the engine and if you download the picture and zoom it up it's pretty easy to tell what's what. But none the less sometimes it's work to make a color scheme and you just figure it out as you go.

They're a LOT more obvious in the "visible lines" map. I downloaded & opened it, & blew it up. The pretty much unidentifiable rectangles are the cylinder, head, and I think the head gasket in the correct relative positions. And I think the thing that looks like a wheel hub in the no lines map is actually the top view of the head bolts. But I've got the same questions. The best idea I can think of is to paint the unidentified bits & pieces some oddball grossly contrasting color & look for them in the editor.

technoid said:
But none the less sometimes it's a little work to make a color scheme and you just have to figure it out as you do it.
Click to expand...

That's true. Months ago, I started (but didn't finish) a rainbow color scheme for your fun-fly p51, and I had to do some test spots of color to see where they actually went on the airplane in RealFlight. I'm pretty sure they were on the inside/hidden surfaces of flaps & ailerons.

Bill Stuntz said:
The best idea I can think of is to paint the unidentified bits & pieces some oddball grossly contrasting color & look for them in the editor.
Click to expand...

wow! that's almost exactly what I was describing in my post above that I posted at the exact same time that yours appeared on my screen.

I've got most of the 1x1 mapping finished but I forgot to map the shell inside the wheel pants so I need to go back and add that. And I was waiting till the end to map the fuselage because it's going to be a pain because the top is only from the canopy back so it's going to be off and need some tweaking to make it match correctly. But things are moving along so it won't be too long now. But I may stop mapping for a while and play my game.

Bill Stuntz said:
They're a LOT more obvious in the "visible lines" map. I downloaded & opened it, & blew it up. The pretty much unidentifiable rectangles are the cylinder, head, and I think the head gasket in the correct relative positions. And I think the thing that looks like a wheel hub in the no lines map is actually the top view of the head bolts. But I've got the same questions. The best idea I can think of is to paint the unidentified bits & pieces some oddball grossly contrasting color & look for them in the editor.
Click to expand...

Here's a better picture of the engine. I think you can tell what the engine "head" is and the single line between the head and the cylinder is "all" the fins stacked on top of each other. And I mapped the inside of the muffler's diverter so I could make them darker for contrast. This picture is cutout of the full visible lines template at full size so you can see how clear the real visible lines file is.